The Idol Times is a email newsletter that posts the latest events and promotional information for Crusaders Of The Lost Idols . It is the only known source for obtaining redemption codes. These codes are used for obtaining equipment and chest. 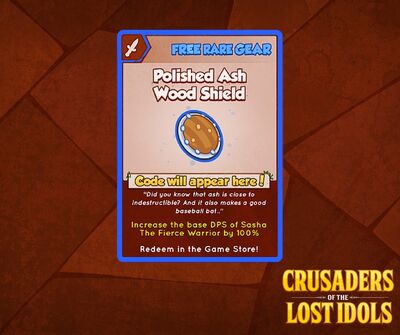 By signing up for the Crusaders of the Lost Idols, The Idol Times you will receive a code in your email, follow the easy steps below, and you are on your way to a fantastic FREE item to give a massive boost for your Crusader Sasha!

Enter your first, last name and email address. Very soon, you should get an email that looks something like the image below; in it you will find a code where the arrow is pointing!

Note that redemption codes only valid on PC/Web. You need linking account to PC/Web if you play by using mobile phone. Instruction is here: [1]

Copy the code from your email, then go back to your game! Find the shop, under the inventory button, also shown in the image below.

Once you enter the shop, you will see the following screen. Enter the code you received in your email under the "Redeem a Code" option. You can then either press the "Redeem" button, or simply press the Enter key, and Voila! Your free item has arrived! Also, keep your eyes open for more issues of The Idol Times coming your way with even more sweet treats, such as Jeweled Chests, community challenges, and news updates! Who knows when even more great gear will be sent your way! 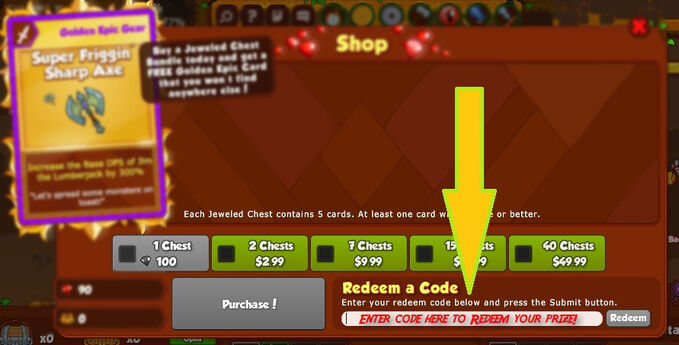 Thank you: Here's Your Jeweled Chest

Thank you for signing up for the Steam launch email

Crusaders of the Lost Idols now on Steam!

After using all 3 codes, one received a bonus gift, a Golden Epic Gear -- Cat-Eye Synth Goggles of Celebration for Artaxes, the Lion.

After using all 3 codes, one received a bonus gift, a Golden Epic Gear -- Futuretech Extinguisher Bomb of Explosive Dousing for Nate Dragon.

After using all 3 codes, one received a bonus gift, a Golden Epic Gear -- Auto-Targeting Shades of Threat Removal (Golden Epic) for The Exterminator.

Retrieved from "https://crusaders-of-the-lost-idols.fandom.com/wiki/The_Idol_Times?oldid=44177"
Community content is available under CC-BY-SA unless otherwise noted.